By kosta Half Day Tours Marathon No Comments 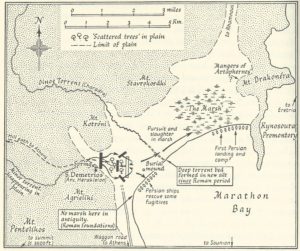 Fighting for Athens: the Battle of Marathon

A tour to the historical Marathon battle area

A visit to the archaeological site, the Tymvos burial mound in an olive grove with a plaque that commemorates the great victory and the Marathon Museum and if the weather permits it, a swim at the sandy beach of Shinias where the Persian fleet landed, is one of the things you must do when you visit Athens.

Marathon is still one of Attica’s loveliest and well known spots. Everyone has heard the story of the Persian army defeat at Marathon at the hands of the Athenians. Imagine marching several thousand miles only to be wiped out 27 miles from the city you came to conquer by an army a fraction of your size. There is not much to see of the battlefield really. Main source of information about the battle in Marathon is the historian Herodotus. According to him, the Persian fleet landed 100,000 troops on Shinias in the year 490 B.C. Against this huge army the Athenians brought 10,000 soldiers and with the help of 1,000 Plataian soldiers, thanks to an ingenious strategic plan of the Greek army commander, Miltiades, they were victorious. They formed the Greek letter (Pi) with weak centre and strong sides, and when the battle started, the central section retreated and the sides closed in and squeezed the panicked Persian soldiers. Thousands of Persians were killed or drowned in the swamp nearby, (where the rowing venue of the Athens 2004 Olympic Games is), while the Athenians had 192 soldiers dead, all burried in the tymvos area. It is E.N.Gardiners’ observation that, ” the victory of the Greeks over the Persians…was the victory of a handful of trained athletes over the hordes of flabby barbarians.”

Legend wants an Athenian soldier named, Philippides, to run from the battlefield all the way into Athens in order to bring the good news. He ran all the way from Marathon to the Athenian Agora. He collapsed and died immediately after he delivered his one word message; Nenikikamen (We have won). In memory of this great victory, the Marathon run was performed in the first modern Olympic Games in 1896 and since then, it is the last event of the Olympic Games. Here is the starting point of the authentic distance. If you think that you are fit enough, you are free to try your physical condition on this classical Marathon run 42,195m.

Today’s amazing thing about Marathon is the marble dam, the only dam in the world made out of marble, that holds the water that supplies Athens.

HALF DAY TOUR TO MARATHON

Upon request, we organise half day tours (+/- 5 hrs) from Athens to Marathon driving along the Athenian North suburbs. At Marathon we visit the “tymvos” burial mound, the museum and end the tour at the sandy beach of Shinias for a swim.

© 2020 - Discover the Greece that you don't know. | Aneeq WordPress Theme By A WP Life | Powered By WordPress.org